Where There's Fire - There's Investigation - If the cause of a fire is suspicious in nature there is much more to its end than the cooling of the embers. When the task of the fire-fighter has ended, that of the arson investigator begins. Technically, arson has several meanings in both common law and statutory language, but to the arson investigator it means the deliberate setting fire to one's own property or the property of another, for an unlawful purpose. There is no other crime for which such diversity of motives is found; fraud, vengeance, murder, robbery, spite, evidence destruction, and the excitement found in fire by the pyromaniac. It is also one of the least expensive crimes to commit. Spending twenty-six cents for a book of matches and a gallon of kerosene, the arsonist can start a fire destroying thousands of dollars worth of property, or even more tragic, taking a human life.

If the cause of a fire is suspicious in nature there is much more to its end than the cooling of the embers. When the task of the fire-fighter has ended, that of the arson investigator begins. Technically, arson has several meanings in both common law and statutory language, but to the arson investigator it means the deliberate setting fire to one's own property or the property of another, for an unlawful purpose. There is no other crime for which such diversity of motives is found; fraud, vengeance, murder, robbery, spite, evidence destruction, and the excitement found in fire by the pyromaniac. It is also one of the least expensive crimes to commit. Spending twenty-six cents for a book of matches and a gallon of kerosene, the arsonist can start a fire destroying thousands of dollars worth of property, or even more tragic, taking a human life.

Arson requires a peculiar and often difficult type investigation. It is peculiar in being two separate and distinct investigations; the first being the one to determine that the fire was indeed arson and the second being a criminal investigation to arrest and prosecute the arsonist. The investigation is difficult in that many times valuable evidence is wholly or partially destroyed by the fire. The investigation is unusual, too, in that city ordinances and state laws have made two separate agencies equally responsible; the Fire Department and the Police Department. Experience has shown that the most effective arson investigation requires the closest cooperation between the Police Department and the Fire Department's Fire Investigation Bureau. Such a rapport has been achieved in Baltimore, creating a blend of knowledge and ability resulting in a high degree of effective teamwork. Exemplary of this blend of knowledge and effective teamwork is the Community College of Baltimore educational program on Fire Prevention Technology which is attended by. members of the Fire Department and all members of the Police Arson Unit. Within the Police Department the responsibility of beginning with the ashes and charred ruins and solving a crime of arson falls to the Arson Unit. The complement of only one sergeant and three detective patrolmen makes this the smallest unit in the Special Investigations Section of C.I.D. It is also one of the busiest. Besides being called to all fires of suspicious origin by the Fire Department, the Arson Unit responds to all multi-alarm and fatal fires.

"Responding to a suspicious fire as quickly as possible is most desirable in arson cases", said Sergeant Joseph Humberson, unit commander. "Ideally, the investigation should begin while the fire-fighters and crowds are present at the scene making it possible to spot known pyromaniacs watching the results of their act, and enabling the investigator to, in a sense, begin at the beginning. Here is where the cooperation with the Fire Investigation Bureau pays off. While they are inside determining the exact causation of the fire, we can work outside. A trained fire investigator can read a fire like a book. Smoke trails, depth of charring, the amount of destruction in one area compared to another area, all tell a story. Combine this information with the results of interviews with witnesses and keen observation and an arrest can be made while the fire companies are still rolling hoses."Most patrol officers responding to a fire feel their primary responsibility is traffic control. However, the observations of the first officers on the scene of a fire could prove invaluable to the arson investigator. For instance, the color of smoke and flames at the beginning of a fire could indicate that a substance other than the building material or its content was afire. Odors at the beginning of the fire might reveal the presence of a petroleum product or other inflammable liquids or highly inflammable plastics. Looking over the crowd, the officer might observe someone overly excited by the fire or even the owner of the building being there without having been called. Forced entry not effected by fire-fighters is another professional observation the first officer on the scene could make, and a good fire report should contain these details, according to members of the Arson Unit. They also pointed out that listing the fire fighting equipment responding to a fire is a carry-over from bygone days and serves no purpose in the modern fire report.

"While arson is one of the oldest crimes, it has until recently been one of the most neglected," Sergeant Humberson said. "There has been a noted increase in arson cases around the country causing a new awareness in arson investigation needs. In many jurisdictions disputes between the fire and police officials over the responsibility for arson investigation have resulted in a curtailment of effective techniques. Today, a closer communication between police departments and the increase in arson incidents are breaking down these barriers and both police and fire department arson investigators are seeking new ways to combat this vicious crime."

" We feel that in Baltimore we have an ideal and most effective climate of cooperation between this Unit and the Fire Investigation Bureau. We have taught each other a great deal about the practical aspects of our related jobs. This, coupled with the knowledge gained from our attendance at arson courses and seminars throughout the country which has been established as requisite by Commissioner Pomerleau, we feel has built an expertise second to none." Considering all these things and a mystic romance between man and fire, "the Arson Unit would rate high as one of the most interesting assignments in the Department.

During the past two years the Baltimore City Fire Department, in cooperation with the Community College of Baltimore, has been conducting a degree program in Fire Protection Technology. At the end of this past semester the course in Hazardous Materials was completed and among the students completing the course were four members of your department. Chief Thomas J. Burke, who is the instructor for the course, has asked me to convey to you his congratulations along with mine on the academic performance of these men, who each attained a grade of "A" for this c credit subject. These men established an excellent rapport with the members of the Fire Department in class and are certainly a credit to your department.

The officers concerned are:

The Board of Fire Commissioners commends most highly Detective Richard L. Ayres, Detective Billie Hedgapeth and Detective Clifford L. Thomas of the Criminal Investigation Division, Arson Unit, Baltimore City Police Department, for the outstanding police work done in connection with the investigation of the serious fire which occurred at 1109 Pierce Street on October 19, 1969. The intelligence and tenaciousness of the above Officers resulted in the apprehension of three youths who were recently convicted in court for starting this multiple alarm of fire which resulted in the death of a 63 year old male along with extensive property damage. The Board of Fire Commissioners congratulates Detectives Ayres, Hedgepeth and Thomas for their expertise and thanks them for the support given in full measure to the Baltimore City Fire Department. Certificates of Appreciation will be presented at ceremonies to be held at Fire School on June 23, 1970 at 7 :00 p.m. It is trusted that you and the above Officers can be present for the occasion.

Board of Fire Commissioners 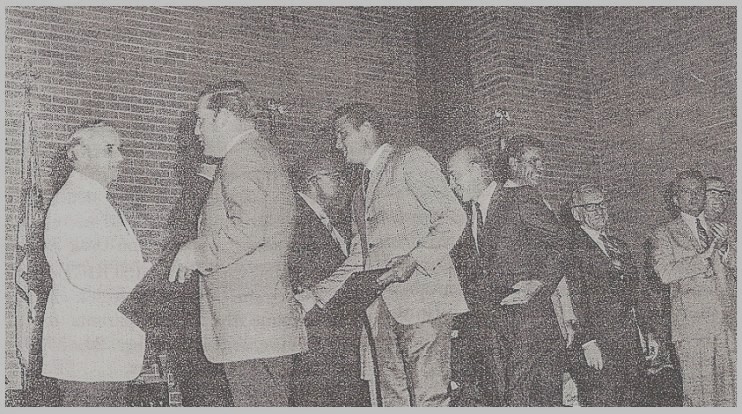 As indicated in the letter reprinted above from Mr. James J. Lacy, Jr., President of the Board of Fire Commissioners, Detectives Richard Ayers, Billie Hedgepeth and Clifford Thomas were presented "Certificates of Appreciation" by the Board on June 23rd. Among the dignitaries present at the ceremony were Mr. Hyman Pressman and Mayor Thomas D'Alesandro, III. June 23, 1970 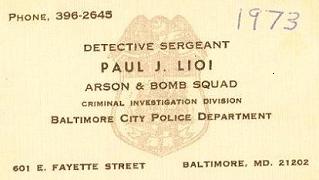 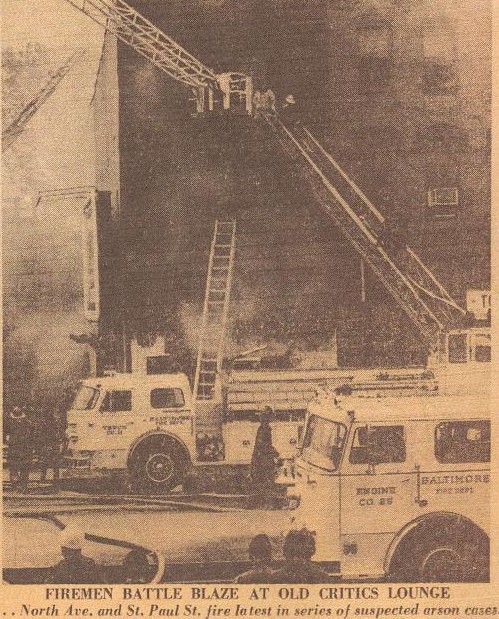 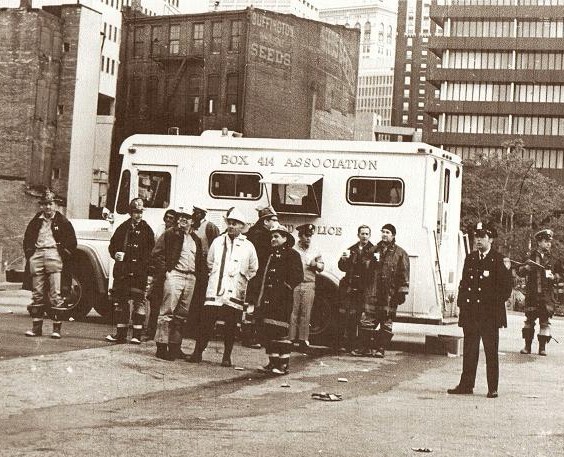 More in this category: « Eastern District Initiative Vice Squad and Al Scarface Capone »
back to top