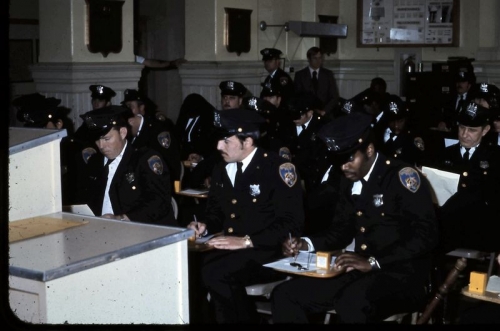 Upon seeing Officer Greiner in the hospital bed two things happened; 1st, Officer Greiner did positively identify Teves as the person that had shot him while he lay injured in the street. Then, realizing he was caught, Teves lunged at and began to attack Officer Greiner. There are few things that affect police more than seeing a brother officer injured; one of those is to see someone trying to injure someone that an officer feels a personal obligation to protect, i.e. an officer as he lay helpless in his hospital bed. With this Teves was either thumped with an Espantoon or Buffaloed by a nearby officer with the butt/grip end of a Smith and Wesson .38 cal pistol. We may never know which, because to Buffalo someone in Baltimore was rare, and not part of our training, as well to carry a nightstick into a hospital detail was 50/50 some officers did, others left it in their car. In either case, Teves himself quickly became in need of medical attention and was taken from University Hospital to Mercy Hospital where he was admitted for a serious head injury, and of course that original little boo-boo to his hand.

While in the hospital Teves was guarded by two officers; Officer John Provenza, and Officer John Burns, Officer Provenza stepped in the hall for a minute, some reports say to take a smoke, others say he was guarding the prisoner from a chair in the hallway. (It was 1974, times were different, smokers could take smoke breaks inside buildings until the early 90’s) while alone with that single officer, the suspect seized the opportunity, and lunged from his bed, attacking Officer Burns, a struggle ensued, and Teves managed to get Officer Burns’ gun; Officer John Provenza heard the commotion and quickly came back into the room; just as Provenza entered the room, Teves managed to fire off several rounds, two of which struck Officer Burns. As Officer Provenza re-entered the room he drew his service revolver and squeezed off a round or two at Teves thereby ending the threat and saving Burns' life.

Officer Burns would go on to survive his injuries. Officer Greiner wouldn’t be as lucky, for 11 days after being shot, on 10 December 1974; Officer Greiner would die due to complications that had set in from one of the rounds perforating his colon and ending up lodged against his spine.

The suspect, in this case, William E. Teves the 3rd, was an orphan, and was no stranger to police; even less, a stranger to police involved shootings, as a little more than a year earlier he was arrested for shooting Central District Officer, James H. Harris, on Tuesday, 18 April 1972 – just outside the White Coffee Pot Jr. when the two attempted to rob a vagrant in the restaurant restroom; the vagrant had no money, so he was pistol whipped. As Officer Harris entered the restaurant Teves and Jenkins (the suspects were exiting the restaurant) and walked past the young officer, a few second later an unknown customer shouted that there had been a man beaten up in the men's room. Patrolman Harris rushed to the street to grab the two men he had just seen leaving the restroom as he entered the establishment. Witnesses said just that fast they heard a volley or shots, and saw Patrolman Harris stagger back, and fall to the pavement on his back. Harris was forced to undergo a four-hour surgery; as the shooting had caused damage to his left lung, his liver, and doctors had to remove his spleen. They said Patrolman Harris, was unmarried but had recently become engaged, he was a probationary officer. The victim of the beating at the restaurant was identified as John Grimes, 47, he was staying at the Armistead Hotel, (Fayette and Holliday Streets.) Grimes was treated for cuts and bruises at Mercy Hospital and later released. Grimes told police the suspects accosted him in the men's restroom and began beating him on the head with a pistol. He said they attempted to take money from him, but he had none. When it came down to it, the young officer never got a good look at Teves, nor did Grimes, so charges on Teves were dropped, in this case…

But that didn’t mean the judge forgot about them. Likewise while in the hospital when Teves attacked Officer Burns taking his gun, and then shooting him, making Burns the 3rd known officer Teves shot, though Teves wouldn’t be charged with the first two shootings, or the beating of grimes in the men’s room of the white coffee pot Jr. Judge Basil A. Thomas didn’t just forget about those incidents. It may not have been entered in as evidence and wasn’t marked as a conviction so to speak… Judge Basil A. Thomas still remembered it; his memory was obvious when he imposed a sentence on Teves, having just been convicted of 1st-degree murder in the shooting death of 25 year old, Northern District Officer Martin J Greiner . Teves so lackadaisical that he would yawn when the jury foreman announced the verdicts convicting Teves of murder, use of handgun commission of a violent crime, unlawful possession of a concealed weapon. Teves was quick to demand his right to file a motion for a new trial, telling the judge and courts, “This was a mock trial, and anything I would say would not make a difference.” Judge Thomas after a brief recess granted the defendant's request for an immediate sentencing. “This was an unexplained, unprovoked and coldblooded shooting of Officer Greiner, which ultimately resulted in his demise.” The judge said, “It is a crime that has shocked and is shocking to the entire community, and it deserves the harshest penalty that this court can impose.” The Judge was told Teves was the product of a broken home, and that he had begun living in and out of orphanages since the age of 10, he never felt loved, and turned to alcohol for comfort. The Defense went on to ask that Teves be sent to Patuxent Institution for Psychiatric Treatment. Judge Thomas refused that request… giving Teves, “Life plus 18 years”, saying, “I couldn’t take the shooting of Officer in Harris a little over a year ago April of 72 into consideration; nor could I take the more recent shooting of Officer Burns, into consideration!”, he went on to say, “Just as I couldn’t take those into consideration, nor can I take being an orphan as a mitigating factor, or any drinking problems to be blamed for a shooting rampage!” The judge basically sent Teves to a place where they don’t serve alcohol!”

Commissioner Donald Pomerleau saw 1974 as a particularly bad year for Baltimore Police, Greiner was the fourth officer killed in the line of duty that year, and the Commissioner had finally had enough, he determined based on Greiner’s death it was time to issue bullet proof vests for all of patrol. A step in the right direction, it wouldn’t be until 1985 with the loss of Vincent J. Adolfo that we would get better vests, and over the years the vest would get better, and better. During Teves’ trial, his defense tried every trick in the book, from saying he was crazy, to saying he was an orphan, to saying he was a drunk…. None of it worked… while it wasn’t admissible, it was unforgettable what Teves, did in 1972 to Officer Harris, and then after shooting and attacking Officer Greiner, to attack and shoot Officer Burns… unforgettable, Teves needed to be sent to jail and he was.