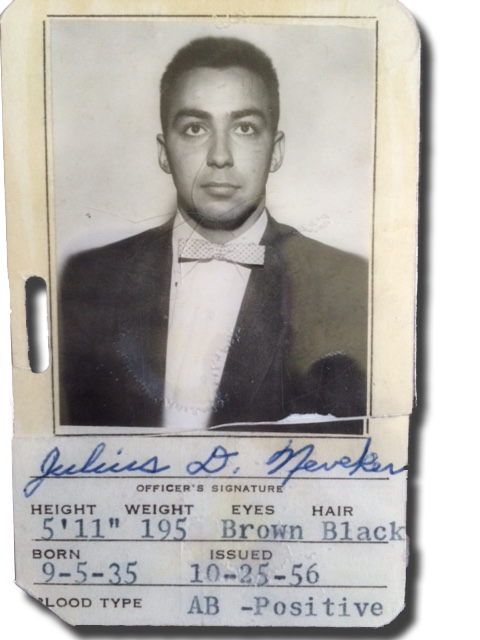 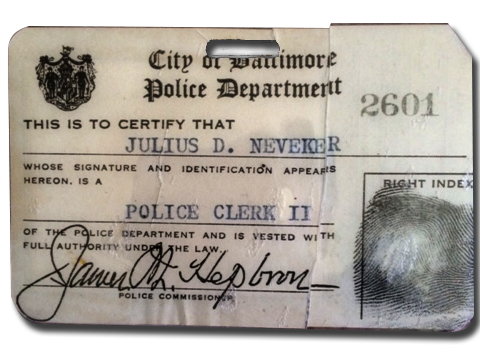 Earning His Badge of Service

On a wintry January day in 1954, an 18-year-old from South Baltimore started his first day on the job as a telephone clerk in the city's Southern Police District. In those days, that was the place where kids who wanted to be police officers grew into the job. Over the next 50 years, Julius O. Neveker Sr. saw a bit of everything when it came to the seamy sides of the city. He saw bloody stabbing scenes. He saw the damage done during the street riots of 1968. He saw commissioners and mayors come and go. And, on one memorable night some 30 years ago, while he was a member of the city vice squad, he helped round up more than 100 female impersonators on prostitution charges. "The good old days are gone forever," Neveker, the longest-serving officer on the city police force, said wryly yesterday at a retirement celebration attended by many dignitaries, including Baltimore police Commissioner Kevin P. Clark. "What can I say?"  His friends came out in force to say goodbye yesterday at police headquarters on East Fayette Street, and laughter filled the auditorium as 150 officers enjoyed the 68-year-old detective's trademark memories and salty humor. Matt Jablow, the city police spokesman, said yesterday that Neveker might be a record-holder beyond Baltimore. "It is believed 50 years is a record for the longest time anyone has served continuously in a police agency," he said. "We're checking the Guinness Book of World Records." Neveker's last post was keeping watch inside City Hall. When Neveker was promoted to patrolman at 21, the Southern High School graduate felt home free. Clad in a pinstripe suit yesterday, Neveker waved a newspaper clipping from 1957 about himself as a telephone clerk. The article noted, "His most cherished ambition is to don the blue as a regular member of the force." During his early patrol days, Neveker walked and covered familiar turf, the South Baltimore streets he knew from boyhood. "In South Baltimore, the men were men and the women knew it," he said half-jokingly. "People in the neighborhood knew you. I miss some of the old-timers." Neveker, known as Jules, clearly hails from the city's old school himself, by the way he says "po-lice," stressing the first syllable. He and his wife Nancy have lived in Eldersburg in Carroll County for many years, but his Baltimore street syntax has not worn off. Other tours of duty included the Southwestern District, the Criminal Investigation Division, the auto theft and vice squad divisions. One night while working on the vice squad, Neveker recalled, he and others arrested 119 "female impersonators," as he put it, near Pennsylvania Avenue to face a judge in District Court the next morning. When he worked downtown, Neveker became known as the "Fish Man" throughout police headquarters because he always stopped at Baltimore's fresh-fish market by the waterfront and brought seafood to colleagues who placed orders. "Word got around that I had fish in my briefcase," Neveker said. In the late 1960s or early 1970s, that practice temporarily came to a stop when a colonel told him he shouldn't transport fish in his squad car. When the colonel found he was delivering fish to the commissioner, the ruling was reversed. Not intimidated by authority in a rigidly rank-conscious organization of 3,300 uniformed officers, Neveker delighted in telling small tales of defiance yesterday.  When a colonel caught him dozing at his desk, he rebounded by telling him he was praying. As he told it, he added with comedic timing: "I was praying that you wouldn't catch me sleeping." On another occasion, when his boss wouldn't give him a day off, he appealed to the boss' wife. Nancy Neveker said even when her husband was sick with a temperature of 103 or 104 degrees, she could not stop him from going to work. "It was my life," Neveker told the audience of officers. "Every one of you is my brother and sister."