The Magic in Baltimore Police History
Houdini Comes to Town

26 April 1916 no less than 50,000 men, women and children jammed shoulder to shoulder in downtown Baltimore to see Harry Houdini the famous escape artist, give the greatest free show that up until that time the city had never seen.  In front of the old Sun Paper Building at Baltimore and Charles Streets was a block and tackle which extended down to a platform on the sidewalk facing the Savings Bank of Baltimore.  The short stocky magician stripped off his coat and dropped to a sitting position on the platform, his assistants James Collins and James Victory swiftly went to put padding around his ankles, applying a brace to his ankles that would be attached to the rope of the block and tackle above.  Then our Baltimore Police ancestors Patrolmen George W.  Baudel and James a. Moncks both of which were trained in the use of the restraint having worked the cell block, pulled their jacket a regulation Baltimore Police Straight jacket tight behind the Houdini’s back, tugging to fasten the leather straps as securely as they possibly could.  They then placed his sheathed arms across his chest and again yanked and tugged until the thongs at the closed end of the sleeves were buckled tightly to the rear of the straitjacket and the final strap going from front to back between the performer's legs preventing him from simply slipping the jacket over his head were put into place and secured. Soon he was being hoisted, head downwards, high above the streets of Baltimore.  When he was approximately 50 feet in the air an official timekeeper from the Sun Paper gave a signal and the struggle the crowd had come to see began. Houdini squirmed and twisted in the air like a wicket tuna at the end of a fishing line.  His face became red then redder by the moment as his blood rushed to its head. Every 50 seconds the man with a stopwatch shouted the time, “50-seconds – 55-seconds – 1 minute, by the 1.5-minute mark one of his arms had freed its buckle.  That brought cheers, his other arm was wrenched three at 1:55. Another minute he had begun to slip the jacket from his body, 30 seconds later the canvas and leather police restraint was seen to plummet from 50 feet in the air, down into the crowd below.  A mighty roar came from the crowd greeting his success; the master showman smiled and extended his arms, taking his bow while still upside down... and still hanging 50 feet in the air.

For Houdini fans, it might be interesting to know that Houdini performed often in Baltimore. So while it is not as fascinating as the upside-down escape jacket, But still interesting; in the Tony Curtis movie, reflecting the life and time of harry Houdini, we see Bess, Harry’s wife angry because she didn’t want him doing the “Chinese Water Torture Cell” and made it seem as if the first time he had done the trick it took his life. Truth be told, while in Baltimore many years earlier Harry performed what he described as his most strenuous performance ever. At each performance, he would be locked upside down in a water-filled “Chinese Water Torture Cell” and freed himself every time, a trick he had performed for many many years going back to 1916 right here in Good ole Baltimore.

Over the years, some of the names recorded by the Sun Paper as having assisted him on stage were. Marshal Robert Carter. Turnkey John Latham , Patrolman John Kelly, and Officers George W.  Baudel and James a. Moncks.

NOTE- Turnkey John Latham was killed in the line of duty, he had a Houdini crossing which was told often by him to his friends and family, as well, his partner at the time, Patrolman John Kelly also recounted the story of that meeting. Some say they don’t think it was true because it was not covered, what they don’t know is Houdini controlled the stories written about him. In this case, he simply didn’t have his paid reporter, report the story. I doubt John Kelly and John Latham would have created such a tail.  What follows is the story as told many years later in a 1926 Sun paper article by Ptlm John Kelly. 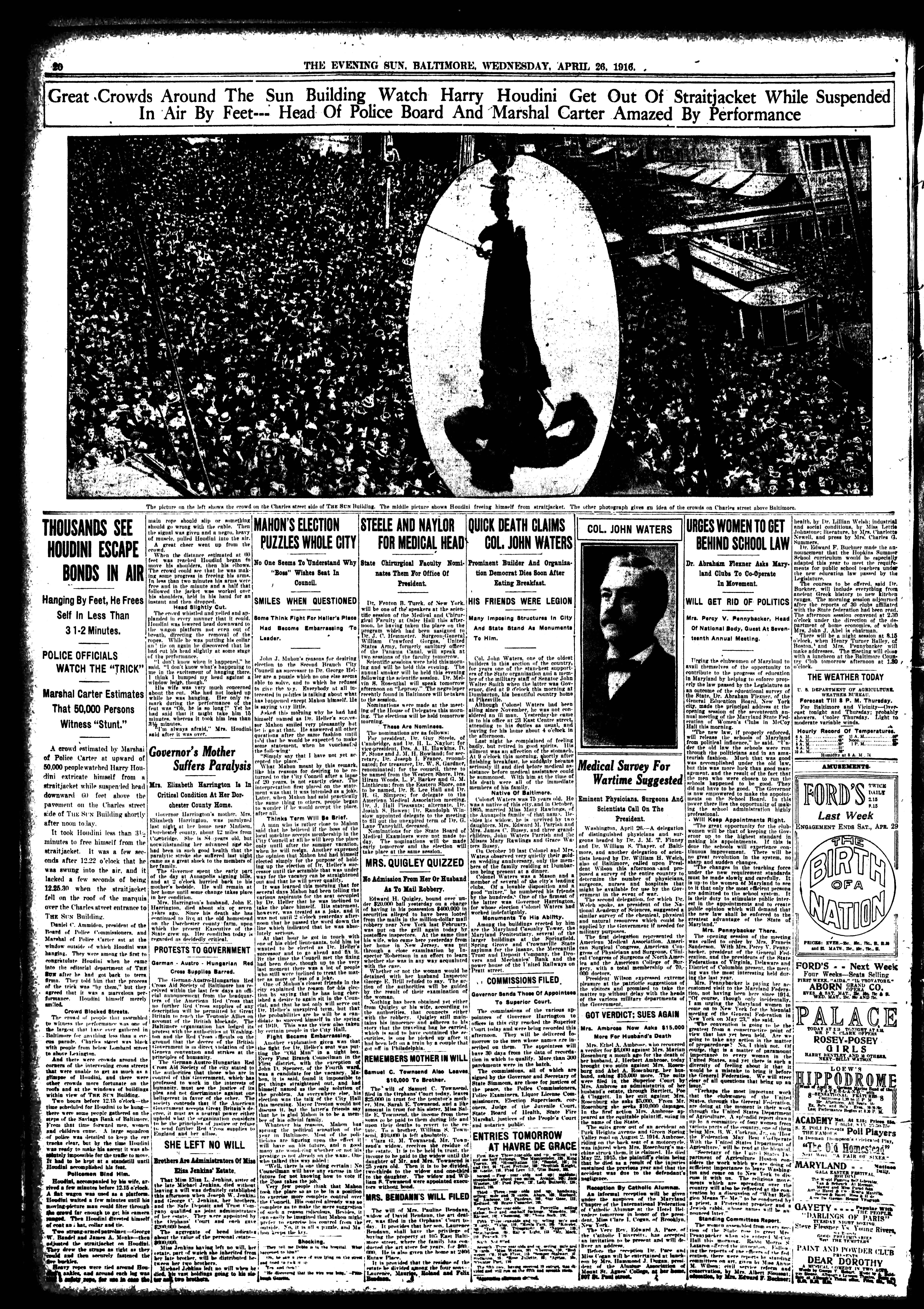 When the city cell of the old central police station building on Saratoga street the police department will lose it's champion long-distance temporary location.

Originally occupied by an African American High School, the building was converted for use as a police station after the old Central Station on Guilford Avenue, near Lexington Street had been condemned.  This was in 1908.  Even at that time, talk of a new Police Headquarters Building had begun to enter into the minds of public officials, and four years later the "Enabling act" was passed by the voters at the General Election.

Before negotiations for the location, building plans etc were complete the World War II came, and it was not until about three months prior to this news story – 18 years after the Central District’s establishment in the Saratoga Street Building – that had by this point found itself as the permanent quarters planned for it.

Standing out from the usual run of happenings common to Baltimore Police stations after two that Patrolman continues to remember in connection with the "Old Building."  10 years ago, the late Harry Houdini gave an exhibition of his skill in the old cell-room.  Yesterday Patrolman John Kelly, a property clerk and one of the oldest men on the district force, recalled the story of the magician's escape from one of the old Central District Cells.

Houdini escaped from a cell

“Turnkey John Latham, and I [Ptlm John Kelly] escorted Houdini into the cell-room, Patrolman Kelly related, “Houdini stopped at the first cell, shook the bars, and remarked that they were not strong enough!" A few cells further he stopped again as he grasped the bars this time he grabbed up higher on the cell door, I [Kelly] noted that he dropped something above the cell door on top the cell's roof." Kelly continued, “After he had gone to the rear of the room to undress, I found a thin, twisted piece of steel with flat ends.  I seized it and handed it to John just as Houdini made his appearance.  John looked him over and lock him up.  As we were about to leave the cell-block area Houdini called out for us to give him his “pick.” It was returned to him, and a few seconds later he had freed himself.”

In July 1919, the only murder that ever took place in a Baltimore Police Station occurred in the old Central Building.  Frank Wezniak, who had been arrested as a suspected burglar, saw Turnkey John Latham through the heart as the turnkey was searching him in the assembly room.

Wezniak then fired at Lieutenant William J.  Klinefelter I [Ptlm John Kelly] was sitting behind a desk.  The bullet lodged in the wall behind Kelly, and Wezniak was quickly overpowered by several patrolmen.  He was given a life term in the penitentiary.

Although the building was large and well-constructed, the fact that it was situated on one of the steepest hills in the city ‘caused many difficulties.

“The second night after we had moved into our new quarters,” recalled Patrolman William (“Uncle Billy”) Warnsman, “One of the patrolman broke his leg while walking down the hill to go on duty.  It was freezing at the time, and the man slipped on some sheet ice.  In the winter it often was impossible for the wagon to make its run because of the snow and ice.

“It was a common occurrence for persons who had come into the station to make a complaint, or summon the police to be unable to talk for a minute or more because of their insertion in climbing up the grade of the sidewalk/path which led to the station house entrance.”