As if losing a brother officer isn't bad enough we are once again victims of the media's total disrespect for police officers. How insensitive could anyone be to use the phrase, "Drops Dead" on his beat... Do they not know this was someone's son, husband, brother, uncle or dad, and for them to pick up a paper and read something so heartless at what would obviously be a hard time in any family. Patrolman Osborn was just 38 years old at the time of his death.

7 May 1930 we lost our Brother, Patrolman Robert L Osborne of Baltimore Police Department's Western District. Osborne was a member of the force for approximately 11 years found himself in the 400 Blk of S Paca St when he started feeling ill, this was a time before radios so he found his way to the rear of 409 S Paca St the home of William Lendberg. Mr Lendberg could see the officer was in need of medical assistance so he contacted the district and they sent police and an ambulance to transport the Officer to a local hospital where he succumbed to his illness. He had a brother on the force Patrolman Allen Osborne who was assigned to the Northwestern District at the time of his brothers death. Officers assigned to the western District at the time told investigators that he had not complained of illness at the start of his shift.

We don't know why he died at such a young age, I know the article says he was 250 pounds, but I was 250 pound for a bit when I was on he force, and I was still active, still making chases, and making arrests. In fact i didn't slow down or get seriously hurt until I lost the weight. We didn't know if he caused his heart attack from a call prior to this in which he may have had to struggle, or if this call was out of his area, he was assigned to an area between Green, Pratt, Eutaw and Barre Streets he may have been off post backing someone up, or coming from one end of his post to the other. What we do know is he came into work alive, he was breathing with a heartbeat and no apparent signs of sickness. So while we are not sure what caused his heart to fail bringing about his death, we do know he was our brother, and having died while working wearing the uniform of a Baltimore Police Officer he and his sacrifice should be remembered.  His family deserves closure for their loss and we should take a minute to remember him on the date of his falling 7 May 1930

May he Rest in Peace 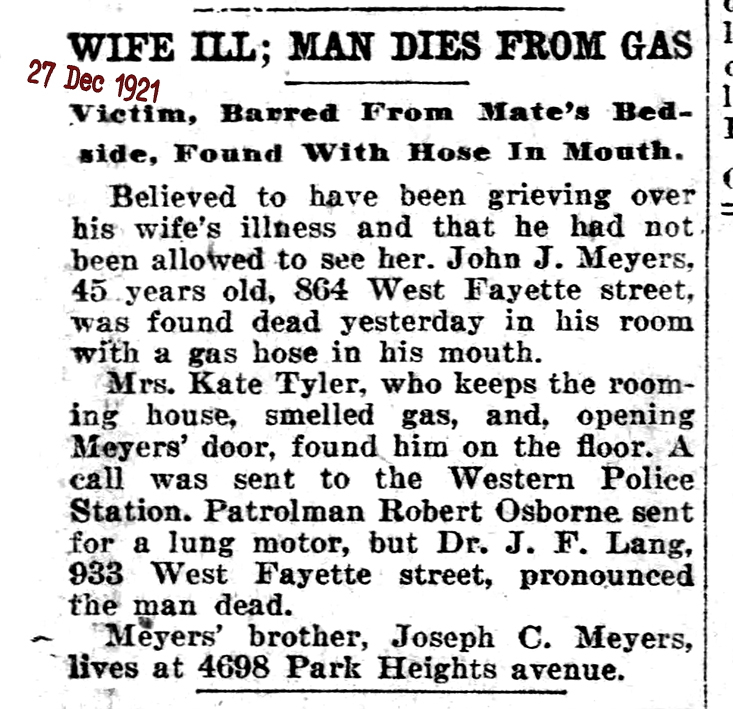