Officer William M. Hackley passed away at home in his sleep, he is survived by his wife Donna

This site will be preserved and up-kept to both honor Bill, and the Baltimore Police Department. Just as Bill kept us all reminded of our Fallen Brothers and Sister(s) in the Baltimore Police Department, so shall this site remind of us of Bill, and the pride we all share for the Baltimore Police Department. RIP Bill you will be missed.
When Bill built this site he wrote the following to describe himself and his vision of the site.
I joined the department in 1967 and was assigned to Tactical Section / K9 at Pratt & Calhoun Streets in South West Baltimore City. I started the Department as one of it's1st Cadets, where I served for a year and a half until I was transferred to Central Records, and then off to the Academy, from there I was assigned to the Northwestern Districts Special Operations Unit From there I went to Southeast District where I worked patrol. Then I was assigned to a post car in patrol, before long I had been assigned to work the Crime Control team, an elite federally funded unit to attack crime and make the citizens feel more secure with an increased police presence. From there I went to Southeast District where I worked patrol and drove the paddy wagon back to the Northwest where I worked a foot squad. After a line of duty injury I was assigned to the District Commander's Stats Unit. Then a year in Communications Division dispatching patrol units. Finally I was assigned to the Crime Lab Firearms Identification Unit until retiring in 1994. Since retiring I have restored a 1968 Chevy Traffic Unit, the old blue and white. I have taken part in countless memorials to our fallen heroes, other departments and even out of state memorials. I have attended numerous funerals for ours, and other fallen heroes. At the request of many family members have taken the antique BPD car to retired Officer's funerals. I have established a Baltimore Police Museum and this Web Site to preserve the history of the Baltimore Police Department. I have collected thousands of files with pictures, newspaper articles that depict the history of this agency. I have amassed a collection of original BPD memorabilia including call boxes and other original equipment. Recently I was contacted by a production company who is producing the remake of the movie Hairspray as they are interested in my lending them a hand with technical assistance for the involvement of the Baltimore Police Department in the movie and also provide Baltimore Police Props to be used in the actual movie. I also was contacted by the production of the hit TV show NCIS to help with the production of an episode. 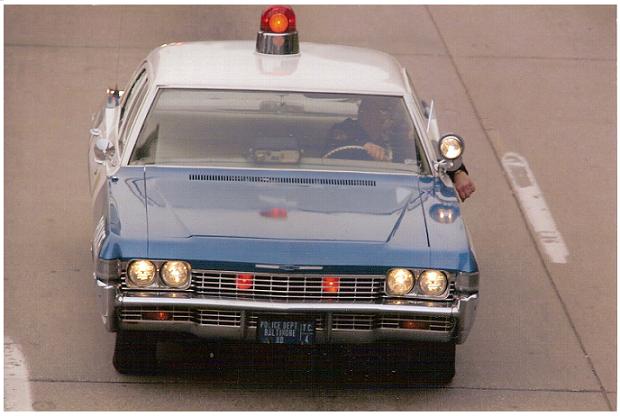 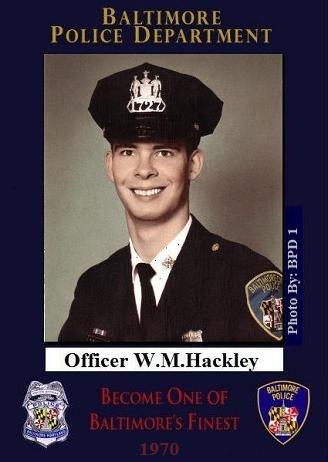 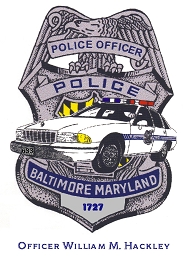 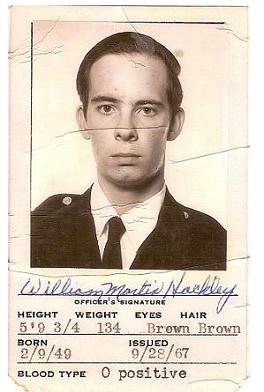 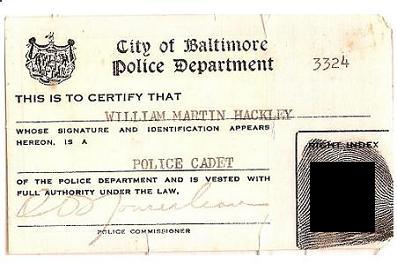 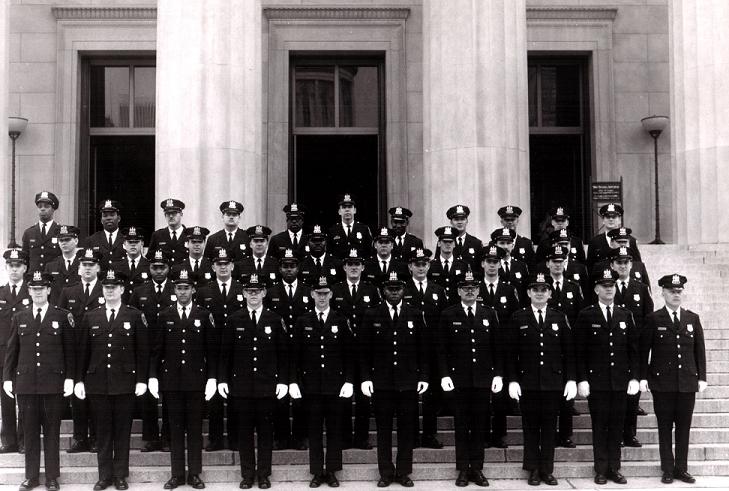 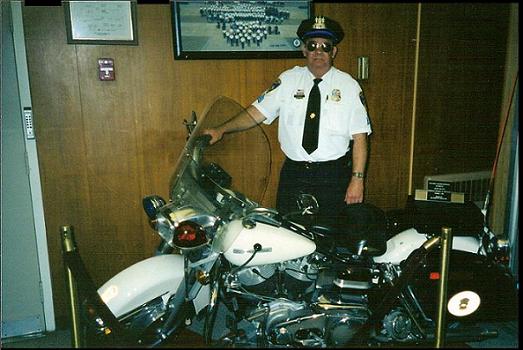 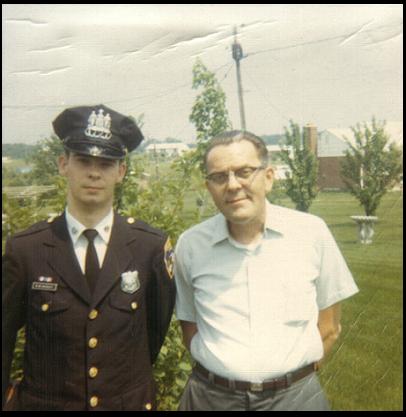 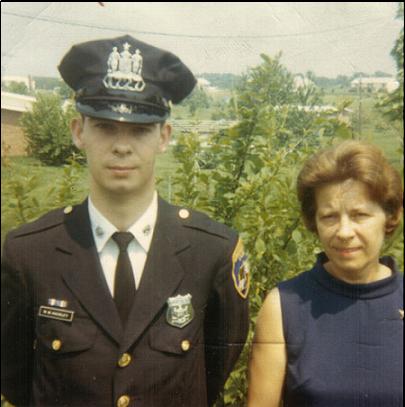 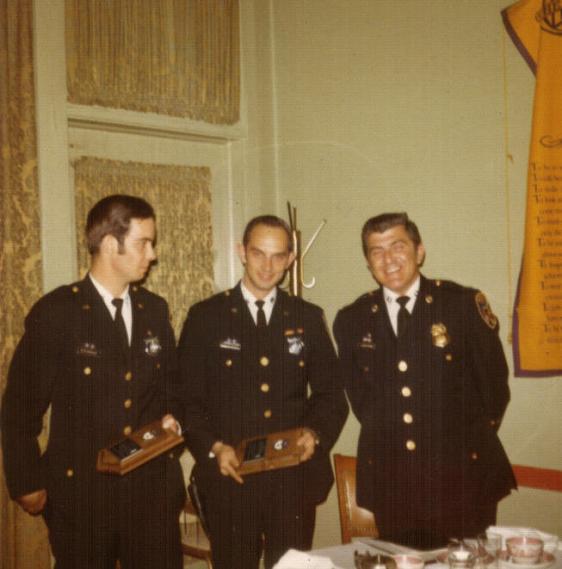 Officer William Hackley (left) Officer William Reinhart (center) Captain Theodore Weintraub (right) Officer Hackley and Officer Reinhart came upon a large apartment fire,which proved to be a 3 alarm fire, in the early morning hours and rescued 23 children and a dog from the blaze. No children were injured, however both officers sustained minor injuries and smoke inhalation, treated in the hospital and released in good condition.

An old time cop gave me this advice when I first joined the department.

He said: Always remember that as a Police Officer you will be meeting people at their worst. Whether an accident victim, a victim of an assault or a robbery, a victim of a property crime or burglary, a lost person, or a person who just needs to talk with someone. They are NOT their usual self, that they would be under better conditions.

Their problems may seem a matter of routine or unimportant to you, but at that time it is the MOST important issue on that person’s mind. Try to see their issues and do your best to bring some comfort and relief and always show compassion for them. They depend on YOU as a Police Officer to be their strength.

During his career numerous people have inspired him:

I can honestly say that I had a very good career in Law Enforcement. I would not have changed a thing in my decision to become a Baltimore City Police Officer. I had an excellent upbringing and was always taught right from wrong and to help whoever I could and respect everyone.

There were many Good times and plenty of Bad times. The good far outweighed the bad. The feeling you get when you help a child, an elderly person, a crime victim, accident victim, a stranger, a visitor to the city. To apprehend a criminal and bring the first step of closure to a victim of an incident. The BAD times were just that BAD. Injury or death to a child, and the same for an innocent victim of a crime. A victim who lost their belongings, or the despair of anyone in fear of their safety.

Particularly trying BAD times, was the loss of close friends, BROTHERS in BLUE who fell in the line of duty. Those who gave their lives for the betterment of their fellow men.

Police work is a time honored profession and I am very proud to have had the opportunity to serve as one of Baltimore’s finest.

After our tour through the White House we were invited to the United States Park Police Headquarters for a tour of their facilities. In their lobby is a restored 1978 Harley Davidson motorcycle that was donated by the Baltimore Police Department. The motor unit was restored by US Park Police mechanic John Bayer in 1990 The US Park Police were the official escorts for the Historic Police Car Honor Guard and went above and beyond their responsibilities to ensure that our visit to POLICE WEEK was a memorable experience. Please consider attending Police Week in Washington DC, sometime during your career in Law Enforcement. A candlelight vigil at the National Law Enforcement Memorial or attending the ceremony on the lawn of the US Capital, is a very moving experience. Thousands of Law Enforcement Officers from around this country and the world coming together to Honor the memory of Fallen Heroes. I have had the great fortune to attend numerous Police Week activities in the last several years and enjoyed the feeling of comradely with brothers and sisters I never knew I had. Officers, Sheriffs, Troopers, Rangers from everywhere, arm in arm and with tears in their eyes as they share stories of loss and hear the words at official functions. What a powerful experience to savor.

As a law enforcement officer, my fundamental duty is to serve the community; to safeguard lives and property; to protect the innocent against deception, the weak against oppression or intimidation and the peaceful against violence or disorder; and to respect the constitutional rights of all to liberty, equality and justice. I will keep my private life unsullied as an example to all and will behave in a manner that does not bring discredit to me or my agency. I will maintain courageous calm in the face of danger , scorn or ridicule; develop self-restraint; and be constantly mindful of the welfare of others. Honest in thought and deed both in my personal and official life. I will be exemplary in obeying the law and the regulations of my department. Whatever I see or hear of a confidential nature or that is confided to me in my official capacity will be kept ever secret unless revelation is necessary in the performance of my duty. I will never act officiously or permit personal feelings, prejudices, political beliefs, aspirations, animosities or friendship to influence my decisions. With no compromise for crime and with relentless prosecution of criminals, I will enforce the law courteously and appropriately without fear or favor, malice or ill will, never employing unnecessary force or violence and never accepting gratuities. I recognize the badge of my office as a symbol of public faith, and I accept it as a public trust to be held so long as I am true to the ethics of police service. I will never engage in acts of corruption or bribery, nor will I condone such acts by other representatives in the pursuit of justice. I believe in the United States of America as a government of the people, by the people, for the people; whose just powers are derived from the consent of the governed; a democracy in a republic; a sovereign nation of many sovereign states; a perfect union, one and inseparable; established upon those principles of freedom. equality, justice, and humanity for which American patriots sacrificed their lives and fortunes. I therefore believe it is my duty to my country to love it, to support its constitution, to obey its laws, to respect its flag, and to defend it against all enemies. - William Tyler Page; Accepted by the House of Representatives on April 3 1918.

More in this category: « Southern Northern »
back to top