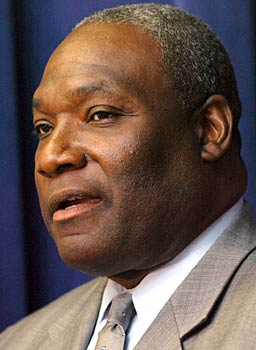 This will have more information as time permits. For now, all we can ask that you consider the source, and know that when asked who most police of the '80s '90s and into the early 2000s felt was the best Commissioner of their time, three names are repeated over and over... Commissioner Leonard Hamm who served as Baltimore's Police Commissioner for 2004-2007 tops the lists, followed by Edward Norris (2000-2002), and then Donald Pomerleau (1966 to 1981). of the three only one worked his way through the ranks from patrolman to Commissioner. Ken worked for Sergeant Hamm when Ken was in training, he would later meet the former commissioner as a Lieutenant, and then as Ken's major, Ken has always had respect for the commissioner, saying he was the reason Ken was given a chance to covert from a welder to a police officer. Donald Pomerleau did great things and had an outstanding legacy, but was really from a different era in our agency's history. Still he had to be mentioned, as well as Norris. The one thing that any of these men have in common is their leadership ability.

Again, we will add more to this as this portion of the site takes shape. For now, it is safe to say, among the top Commissioners of his time, Commissioner Leonard Hamm was one of the best, his leadership ability was second to none. He put his men first and wouldn't ask anyone to do anything he himself wouldn't do.

Copies of: Your Baltimore Police Department Class Photo, Pictures of our Officers, Vehicles, Equipment, Newspaper Articles relating to our department and or officers, Old Departmental Newsletters, Lookouts, Wanted Posters, and or Brochures. Information on Deceased Officers and anything that may help Preserve the History and Proud Traditions of this agency. Please contact Retired Detective Kenny Driscoll. This email address is being protected from spambots. You need JavaScript enabled to view it.

More in this category: « Good Cop - Bad Cop Motors »
back to top