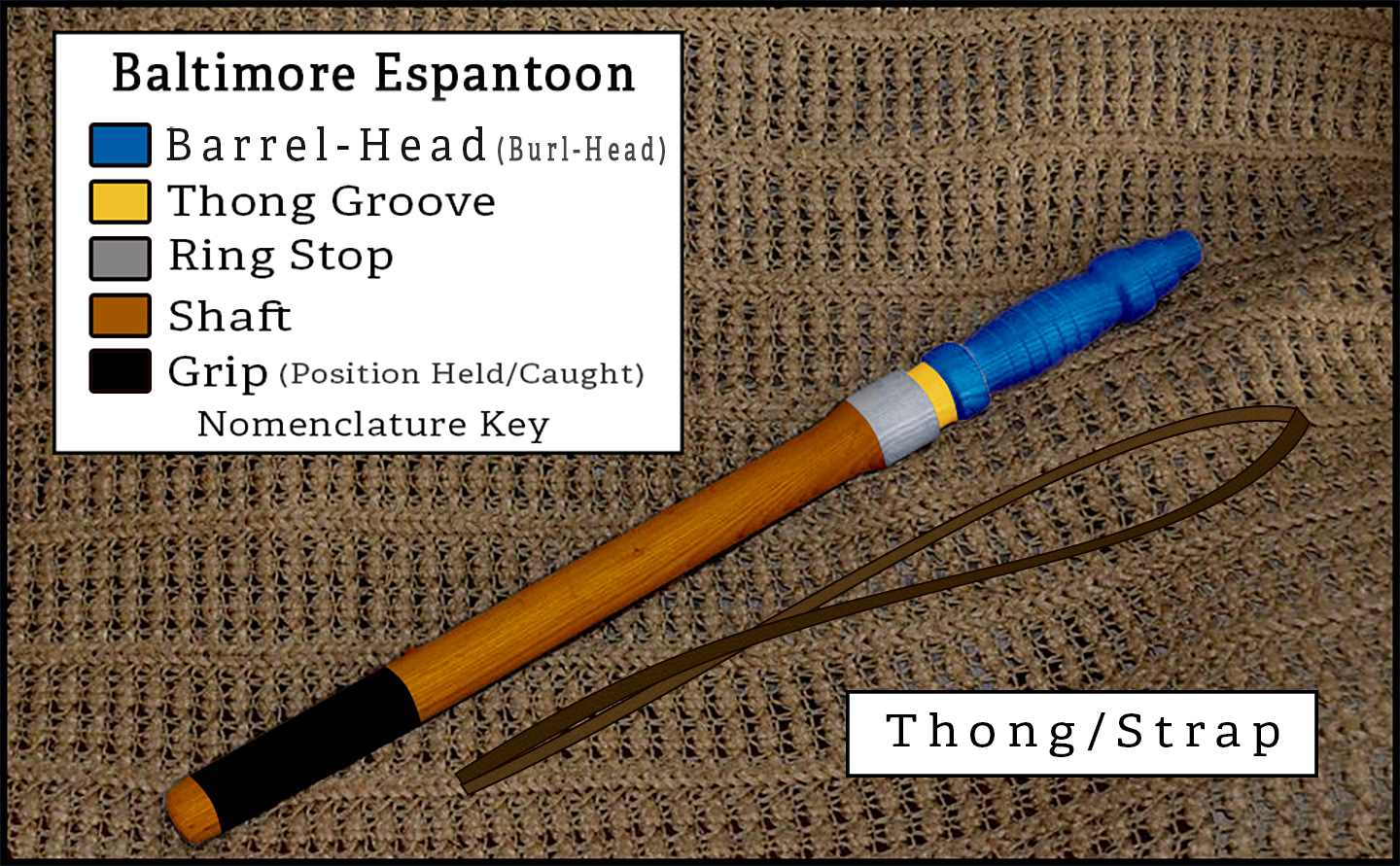 Webster's Third Edition: defines an espantoon as follows; "An espantoon In Baltimore, a policeman's club" We would like to start out by saying we collect nightsticks, Espantoons, Batons, Truncheons, Billy Clubs etc. - If you have one for sale, or that you would like to donate, please, let us know as we are interested.  For what might be obvious reasons we particularly like the Baltimore espantoon. Aside from their being the stick carried by our brothers/sisters in law enforcement, they also show a progression not just in what we carried, or had made, but what the department had made for us and issued to us. That said, while we like Baltimore sticks, we collect all sticks, from any state in the US, to any country in the world.

We have always been serious about the Espantoon, and why Baltimore City Police are the only police department in the world that uses an espantoon? Also, why if a Baltimore County Officer and a Baltimore City Officer both have their sticks made by the same guy (let's say Nightstick Joe) why would one guy's stick is a baton or nightstick, and the other is an Espantoon? We talked to several old-timers over the years asking about the nomenclature of our Espantoon. We were told over and over, that the part that looks like the handle at the top is actually not the handle and is called the "Barrel Head" next to that is the "Thong Groove," the "Ring Stop" and the "Shaft." The word, "Barrel Head," might be a mispronunciation that if correctly pronounced, may have solved this riddle much earlier, but we worked with what we had! For years we knew the difference, we just couldn't find the words to explain it. That was until reading a newspaper article one night, when Ken read the question asked by the reporter, it was a question that flipped the switch in Ken's mind, and once it was, it was like the old saying, "It couldn't be unseen!" Now it seems we had more ways to describe, or answer the question, So, what was the 1970's newspaper man's question, he asked, "If a Baltimore City Officer gifts his Espantoon to a Baltimore County Officer, is it still an espantoon?" The answer in Ken's eyes was, no, and as odd as it may sound like so many police issues, it all comes down to training. For years when asked, what makes an Espantoon, an Espantoon, the satisfactory answer was, "Webster's 3rd edition dictionary says it is!" That has not been acceptable to us, so we dug further, reading every newspaper article, every general order, and every policy. Doing so gave us what we think is the truest of answers. Baltimore turns a nightstick into an Espantoon because what looks like a "Handle" is the "Barrel Head," (most likely originally pronounced, "Burl Head") whereas everywhere else in the world the part that looks like a handle, is a handle, but in Baltimore City, we turn the stick around, and that handle looking part is the striking end. If a City and County Officer traded sticks, they would each take their new stick and use it according to their training, one having a nightstick with a handle, the other having an espantoon with a burl head. That is what makes, a Nightstick, an Espantoon. What follows is some supporting documentation on the subject.

As for the old answer to, what makes an espantoon? A name for a nightstick that is only used by the Baltimore police. — Here, is the old answer, from the pages of Webster's 3rd edition. 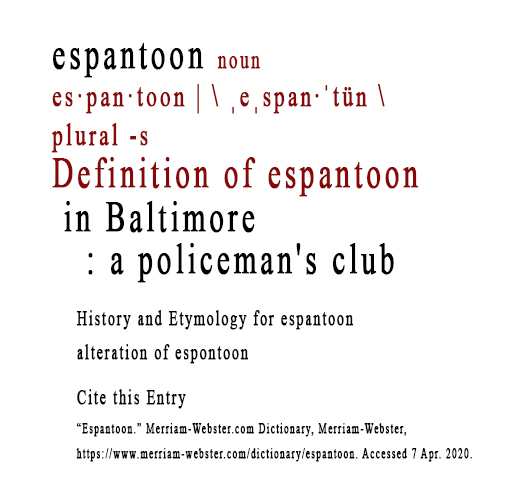 We had a difficult time explaining what made an Espantoon an Espantoon, until reading that 1970's Sun Paper, newspaper article that asked, "If a Baltimore City officer gave his espantoon to a county officer, would it still be an espantoon?" This single question sparked the answer. that we've known for years but had trouble wording our answer into a reasonable explanation.

Baltimore Police Department's General Orders, or what today is known as Baltimore Police "Policy," specifically, Policy number 1111, the Espantoon is defined as follows.

This means our nightstick has a "Burl Head." But what if the county officer simply turned his baton around wouldn't that make it an espantoon? Well in theory it would, except, in Baltimore City this can be done under Policy 1111, and remain within the officer's guidelines and training, in the county the officer would be going against his, or her training, and therefore, not only wouldn't it be an espantoon, but the officer could be charged (if not criminally, at least departmentally) and quite possibly lose his or her job. So, part of it not just that we turn the stick around, it, is that it is within our agencies rules and regulations and is within our training that we use it this way, and that is what makes our baton an espantoon. 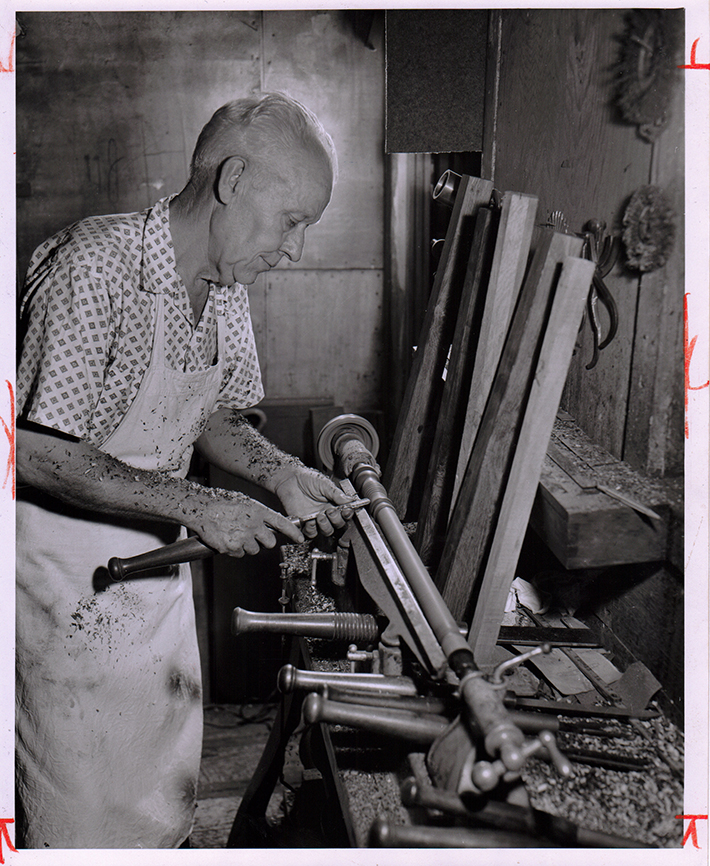 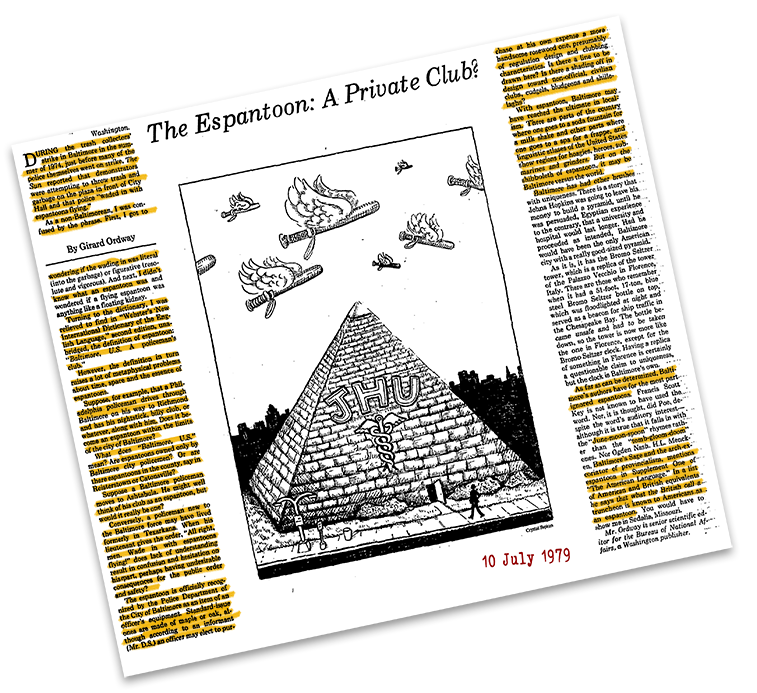 Above is the article that best helped us put our answer into words about what makes an espantoon an espantoon. To read the full article, click on the pic above or click HERE and it will take you to the article, you can click on it after it opens if you need to zoom in.

The blue portion of the espantoon in the above illustration is most often mistaken as the handle of the stick but is the striking/burl end. It is called a Barrel Head, this most likely comes as the result of an error in pronunciation, as in many blunt force weapons, the striking end is called a "Burl" head.  As in the Tomahawk, and other such weapons the blunt end can either be added or carved into the weapon. Here in Baltimore with years of mispronunciation and a slight southern drawl, Burl sounds more like, Barrel. So, Burl Head, became Barrel Head. A funny thing to add to this, is that shape of the Espantoon's burl as it is kind of shaped like a barrel, which added to the error. Now, in the way the JEEP a military vehicle that also has ties to Baltimore has a name that was derived from the letters G.P. for General Purpose. G.P. said often enough, and fast enough took on the sound of JEEP and long before it was manufactured and marketed as the JEEP it became JEEP and would have with, or without the JEEP's we know have forever called a Jeep, likewise, the Burl Head or the striking end of our espantoon will now and will forever be called the Barrel Head. Under the barrel head, indicated with Yellow is the thong Groove, it is where we add a leather strap aka a Thong, under the Thong groove, indicated in black here is the Ring Stop, it is a little wider to help keep the ring from falling through the Ring on our gun belt. under the Ring stop is the Shaft, it gives us reach to create distance between us and a suspect. Down around the bottom of the shaft, about an inch and half up from the bottom and maybe 3 to 4" past that is the grip, it is where we hold the stick when jabbing or swinging, and where we catch the stick while spinning. I hope that helps better understand our espantoon, its parts, how it is used different from your average nightstick. Its name most likely came from, "A Spontoon" and again over the years it may have gone from Get me a spontoon" make sure you have "a spontoon" to "espontoon" to "espantoon"  some early sun paper reports 1839sh had it spelled "Spontoon" Also in pictures of Baltimore Police almost as far back as we can find, officers hold them by the Shaft end, as well on older sticks you can tell by dirt marks where the officers held them and all the marks are closer to the end of the shaft furthest away from the Barrel head.